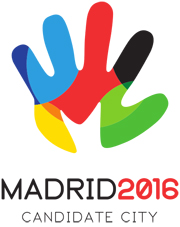 Creativity and Design of the Event organized in support of the Madrid 2016 Olympic bid, chaired by its Mayor, Ruiz Gallardón, and starring children. These participate in the construction, with cubes, of the motto that appears in the atrium: “Madrid 2016”. The graphics of the hand, symbol of the union of the country and the collective desire to host the Olympic and Paralympic Games, stands out throughout the event, projected on large screens and in the form of a giant hand moved by children. An interactive book illustrating the candidacy was published.